This is an incredibly delicious soup, I’m not reinventing the wheel here but this particular combination is wonderful and I wanted to share, I was spring cleaning my refrigerator and found some vegetables I needed to use and thats how this soup was born. The combination is wonderful, honestly, I didn’t know how it would come out, I just started adding things. After boiling the vegetables and pureeing and seasoning with salt and pepper it tasted a bit blah, not very exciting, it’s amazing really what a touch of this and that can do to the flavor of a dish, first I added the pinch of nutmeg, that was good, then added the butter and some cream, ok even better then a teaspoon of honey. It was the perfect combination to bring that soup from blah to wow.  The soup looks dark and brooding but it couldn’t be further from how it tastes. It’s fresh and slightly complex and undeniably vegetable.  Here we go:

Broccoli tough part of the stem removed and cut into pieces

1 potato peeled and cut into quarters

carrots peeled and cut into chunks

onion peeled and cut into quarters

salt and pepper to taste

2-3 tbs heavy cream (you can also use cashew cream, soy or almond milk or do without)

Add a little olive oil to your soup pot, sauté the onion until soft, now add the garlic and don’t let it brown just soften it a little. Add the vegetables and give them a good stir. Pour in the broth or water just enough to cover the vegetables. Cover the pot and boil until everything is tender.

Let cool and puree either with your blender or immersion blender If using an immersion blender take out some of the broth, you can always add it back to thin. you take a chance on your soup being too thin if you blend with all the liquid in the pot. I found that I had about 2 cups of broth left which I froze to use later. Season with salt and pepper, add the nutmeg (very important), the butter, cream and honey and heat through. Is even better the next day. 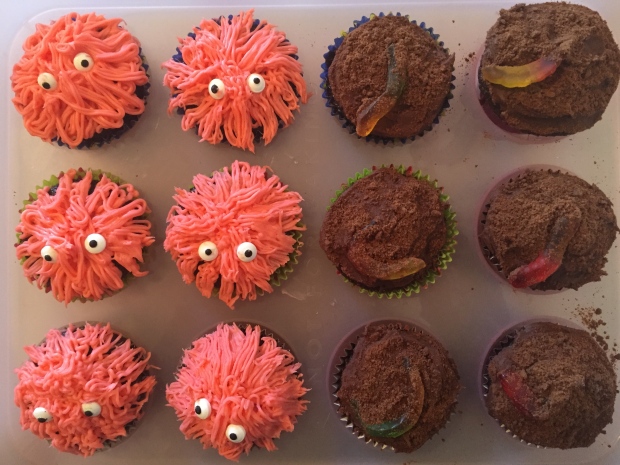 Sweet Maia celebrates her 10th birthday today and  she asked me to make cupcakes for her class at school, I think it’s great that they celebrate the kids birthdays with a party. She saw these cupcakes on Pinterest and this is what she wanted to take to class. The monster cupcakes are chocolate cake with a cream cheese buttercream piped on with Ateco tip #133, I wish I had #234 the holes are a little larger. It was hard piping that buttercream, the frosting was thick and it took every ounce of strength to get that on the cupcakes which is why they look somewhat different, but variety is the spice of life and no two monsters are alike, made pink, blue and green. The finishing touch are googely eyes. Gotta love that. The last 4 cupcakes were not piped as you can see, I couldn’t press on that bag one more time so just spiked the frosting and added multiple googely eyes.

The second cupcake is a dirt cupcake. sounds appetizing right? Again used the chocolate cake, I used the recipe for Hershey’s Perfectly “chocolate” chocolate frosting, it’s quick and easy and very smooth. Thought that would make a good base wherewith to hold the dirt. The dirt is chocolate Teddy Grahams whizzed in the processor. The cupcakes are filled with chocolate pudding. The piece du resistance is the gummy worm sticking out of the icing. They are fun and really delicious and the Birthday Girl and her class loved them. What fun it was to make them!!