Cake – A Learning Experience And A Tip

This is a cake recipe that I have been making for years and years, the recipe is tried and true, tested and developed by my Mom many moons ago. Why then did it fail?  I posted this recipe a long time ago on Food52, it has been featured, made over and over again by hundreds and it’s a really good recipe. It all started a few weeks ago when I decided to make a cake, I followed the directions as I always do, did not deviate, everything looked good until I got the cake out of the oven, it looked different, the sides were shrinking, coming away from the sides of the pan, not just a little but dramatically and the texture just didn’t seem right. It was more like an angel food cake than a yellow cake and was mis-shapen and lopsided. I thought I had to have done something wrong, maybe I whipped the egg whites too long, so I threw it away and made it again this time being EXTREMELY careful with my preparation. Guess what, same outcome. I honestly didn’t know what to think, I am not a novice baker, I try to use quality ingredients and follow directions to the letter. It was discouraging to say the least. I systematically started analyzing everything that went into this cake, eggs were the right size and at room temperature, milk also room temperature, my baking powder was not expired, the only change was that I opened a new box of  cake flour so I thought hmmmm maybe it was the flour. I called King Arthur Bakers Catalog, who by the way are a wonderful company and spoke to one of their baking experts, they took down the lot number and other information on all 3 boxes that I had received and asked me to do an experiment, try making my own cake flour, in case you have never done this you remove 4 tbs of flour from 1 cup of all purpose flour and replace with 4 tbs of corn starch, btw, they refunded my money which I didn’t ask them to do but because they are an outstanding company they did it. A few weeks went by before I decided to give it another try. 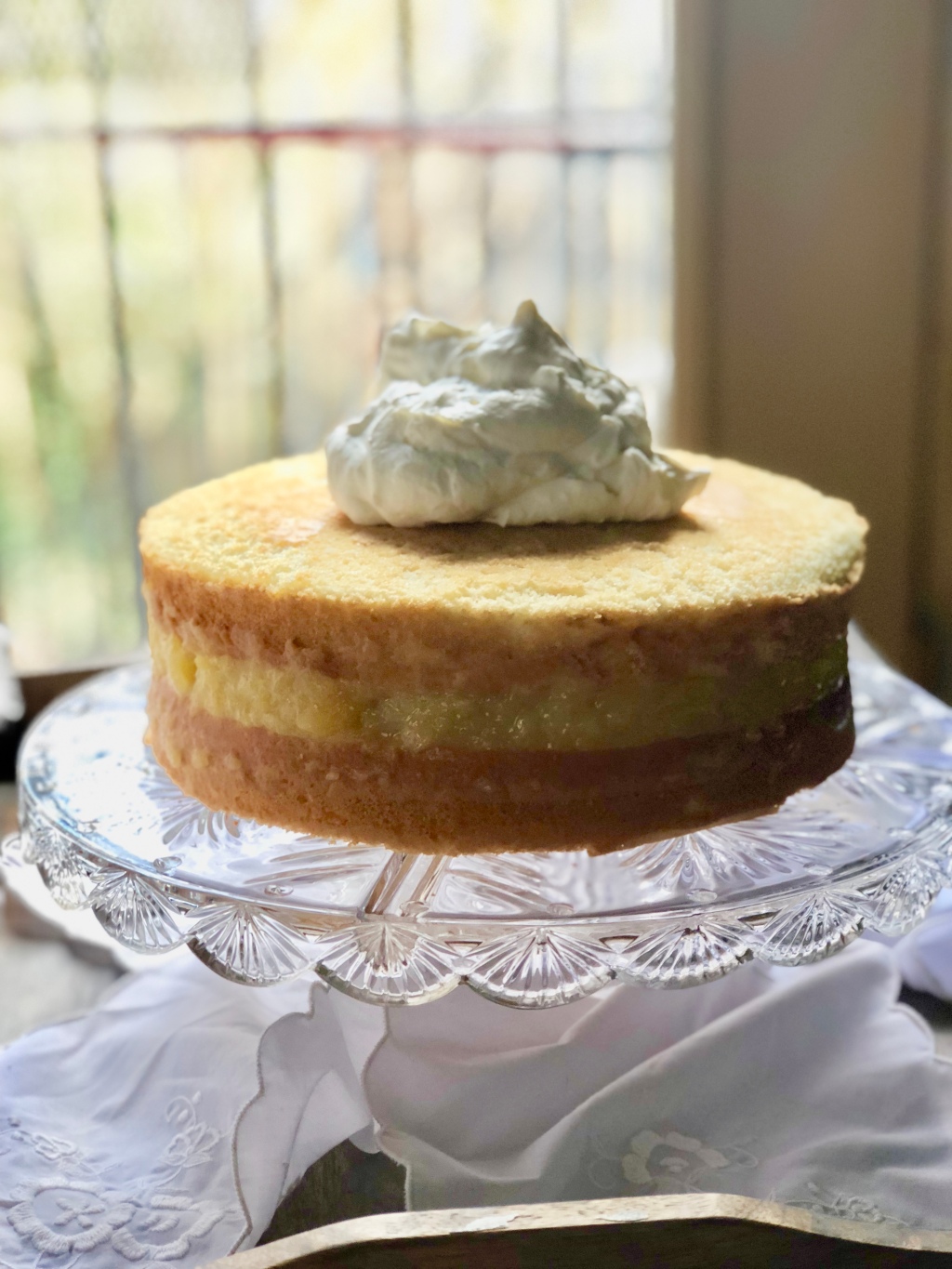 The bottom layer is the one using the new cake pan, can you see the difference?

I made the cake using homemade cake flour, it turned out really well except for one thing, one layer I baked in my Chicago Metal cake pan that I have been using for ions, the other layer I baked in a newish cake pan. The layer in my old pan was great, the other layer was good but not as good as the other layer, how could that be? To be fair I have used the new cake pan for other cake and it turned out just fine but for some reason not as much for this yellow cake. Truth be told I’m very picky and OCD about what I make and I notice even minor changes and they bother me. The cake was good, don’t get me wrong but there was a minute difference in that one layer. Going forward I will only bake my yellow cake recipe in the Chicago metal pans and will continue to be loyal to King Arthur flour but from now on I think I will make my own cake flour. Lesson learned.

I’ve posted this recipe before and it’s a favorite, Coconut Pineapple layer cake It’s delicious, the cake was perfect with a tender crumb, great flavor and very moist. I won’t post the recipe again just the story and some photo’s. Links are provided if you would like to give this a go. 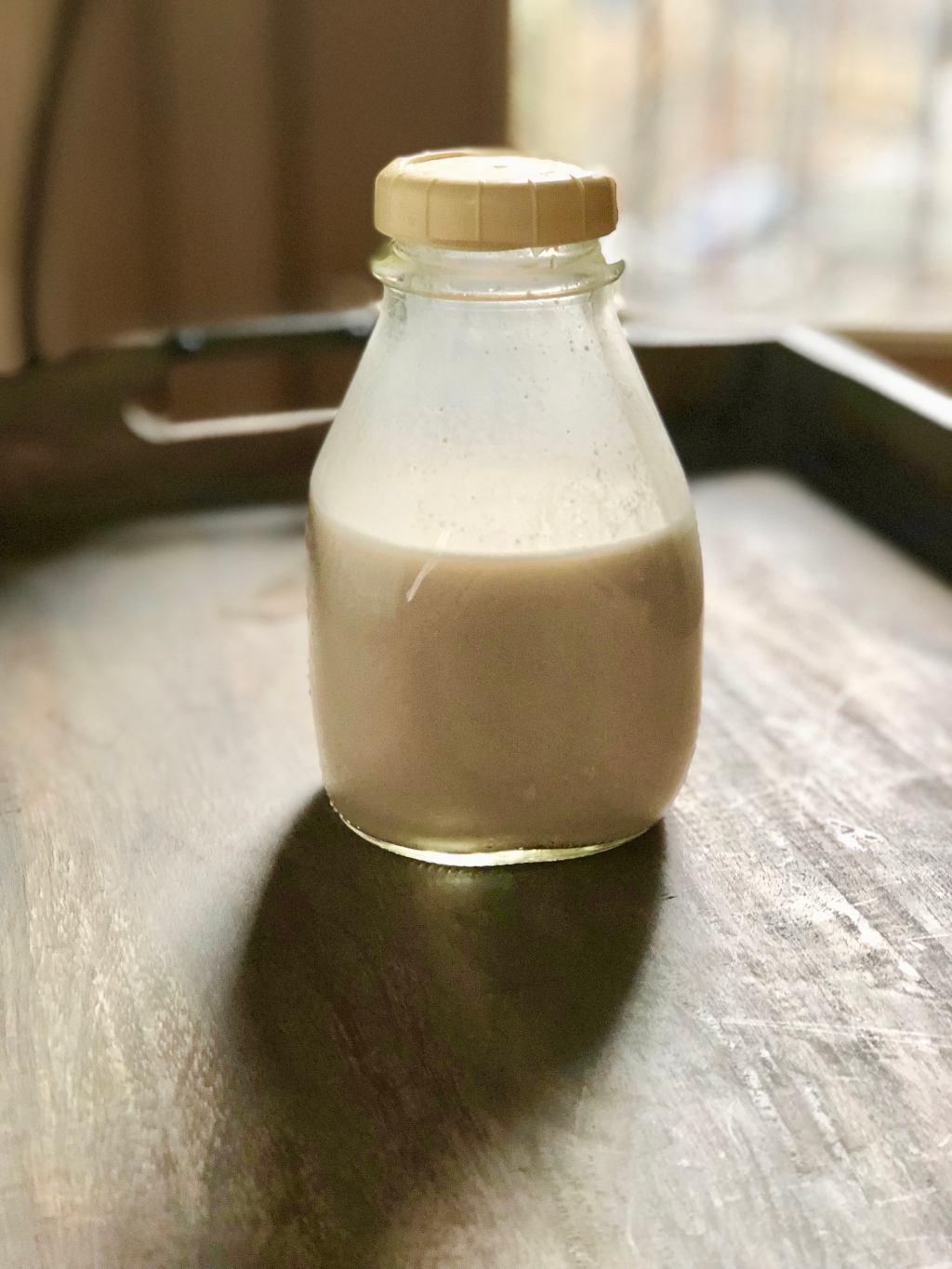 Nut milk is wonderful and a fantastic alternative to milk (dairy). I make nut milk all the time but sometimes would forget to soak my nuts overnight, the other problem is that nut milk doesn’t last long before it goes bad. I had an idea that ended up working out great, I soak a large quantity of nuts overnight, drain and freeze. That way I have pre soaked nuts ready to make milk and can portion out as much as I want. Don’t throw away the nut meal left from straining the milk, it’s fabulous when added to granola. Another perk is that when you add cold water to the cold nuts you have ice cold nut milk, delicious!!

I’ll leave you with a few photos of Percy and Jenna Rose who by the way is doing great and adapting to her new life in Brooklyn. 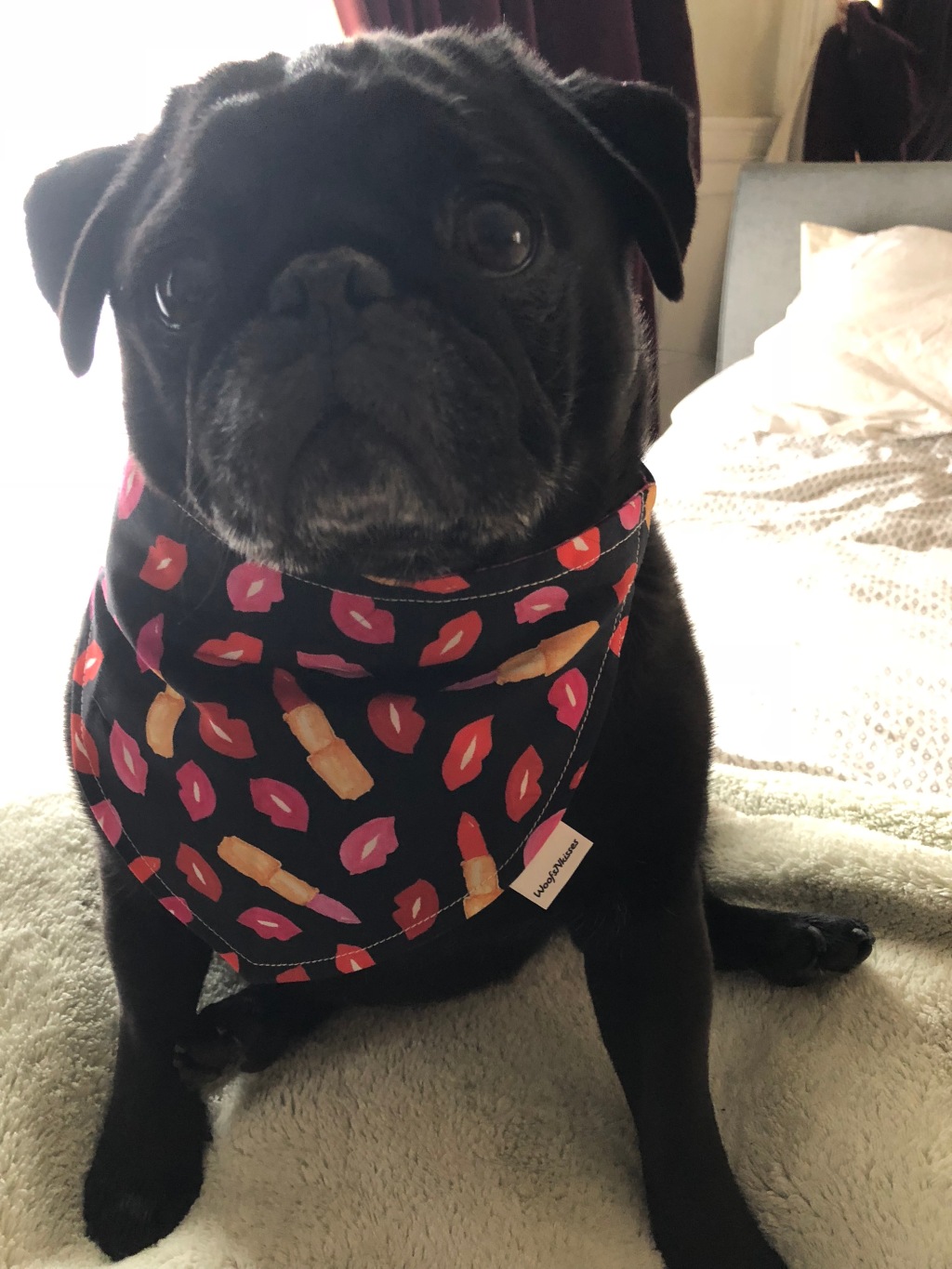 Happy Holidays to everyone, Easter, Passover or just celebrate that Spring is finally here.  Honestly, it has not really felt like Spring with blustery cold and snow and unfortunately more in the forecast for this week. I see signs of the change of seasons everywhere, flowers popping up, longer daylight, warmer weather trying to take hold.

I often make pie dough and will line a tart pan and freeze, this tart is delicious, no animal products were used in making it but you can easily adapt using cream for the ganache and whipped cream to top it. The ganache was made with dark chocolate, sweetened condensed coconut milk and coconut milk. The whipped topping is made by simply refrigerating a can of coconut milk, the cream will rise to the top and become solid. All you have to do is scoop it out and whip it with sweetener and flavoring. 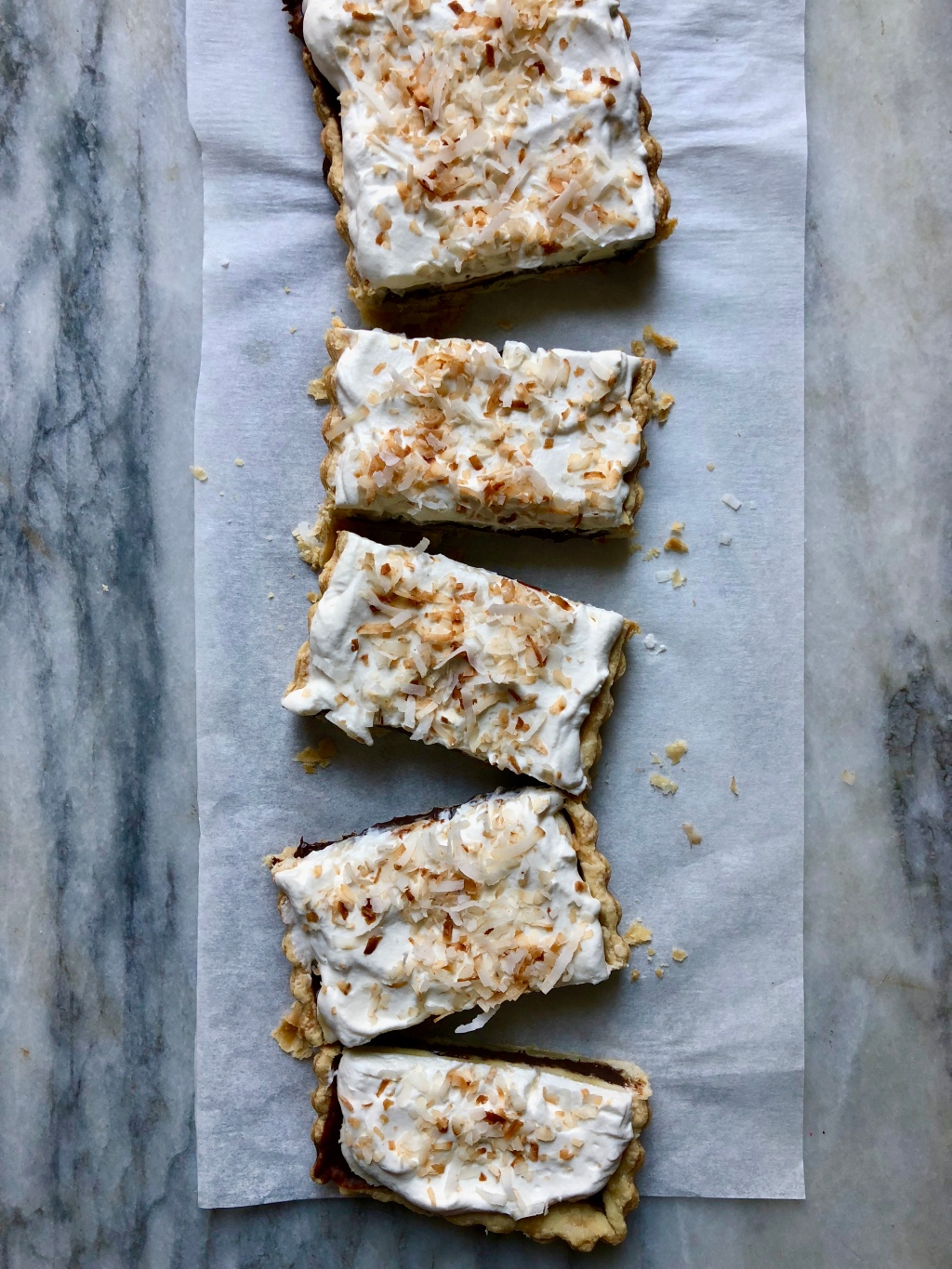 Pie crust ( use your favorite recipe or commercially prepared)

Place a can of coconut milk in the refrigerator before you begin or even better the night before. The coconut cream will separate from the liquid and you will use that (saving the liquid for another recipe)

Heat oven to 400 degree’s. Place pie dough in 8 or 9 inch tart pan. You are going to blind bake the pie crust, place a sheet of parchment on top and fill the pan with pie weights or beans or whatever you like to use. Bake for approximately 20 minutes, remove parchment and weights and bake for another 15-20 minutes or until golden brown. Remove from oven and let cool. Note: the oven should be quite hot, I baked the first tart shell at 375 and even with pie weights it shrunk down the sides.

Heat the coconut milk or heavy cream to scalding. Place the chocolate in a small bowl and pour the hot cream over the chocolate, let sit for 5 minutes and stir until the chocolate is melted and the ganache is smooth and shiny. Pour into the cooled tart shell and refrigerate until set, approximately 1-2 hours or overnight.

Place sliced banana on top of the chocolate. Scoop the coconut cream from the cold can of coconut milk. Whip with electric mixer adding sugar to taste and flavoring of your choice (vanilla)  or you can add 2 tbs of the sweetened condensed coconut milk that is left from making the ganache. Heat oven to 350 and toast flaked coconut until golden brown, watch it closely it will burn and only takes a few minutes. Spread some of the whipped cream (coconut or other) on top of the banana’s and sprinkle with toasted coconut.