by apuginthekitchen on September 3, 2017 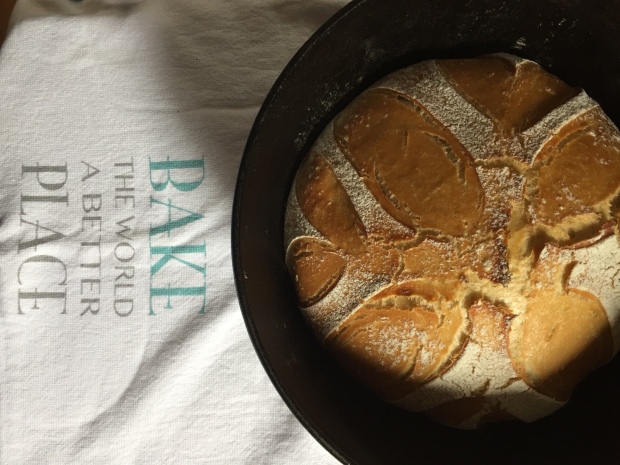 I follow Elaine@foodbod’  both her blog and other social media outlets like Instagram, lately she has been cultivating her own wild yeast and making the most amazing bread, I have been so intrigued and inspired to try her recipe. You make wild yeast simply by putting fruit, in water and let it sit until it ferments it only takes a week sometimes less.  My first attempt I used raisins which for some reason didn’t work so I tried apple and that worked perfectly.

The bread did not have a tremendous rise, it was modest. When making the semolina bread I did add a very small amount 1/4 tsp of instant yeast, I did that because I felt the semolina is pretty heavy and it might need a little bit of a boost, I’m sure it would be fine without it, so that is optional of course. Elaine’s bread is beautiful and the crust is amazing, I’ve made this a number of times and my crust just doesn’t have the same look as hers, it’s still good mind you, but her crust is crusty looking for lack of a better word and meant in a really good way! I have asked her about this and she thinks it could be the difference in flour or some other factor, she is in England and I must say has this down pat. Check Elaine out both on her blog and Instagram. 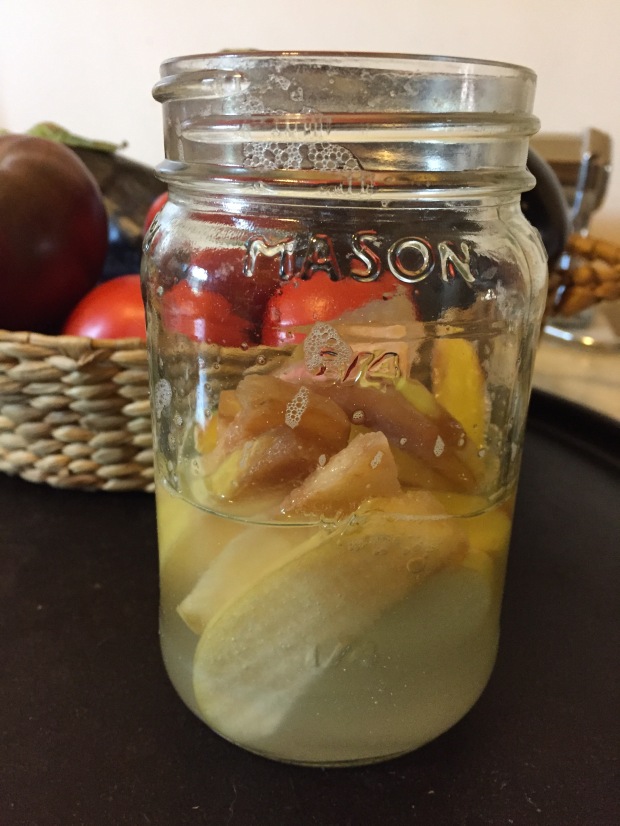 The first loaf turned out beautifully and you can find the recipe on her blog by clicking on the link in the first paragraph, I was so pleased at the rise and the flavor was delicious. 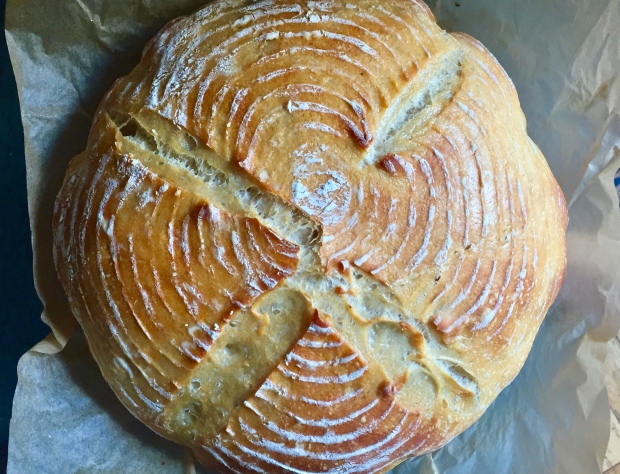 The second loaf I made was from date water, I saw Elaine’s beautiful loaves on Instagram and wanted to give that a go. I deviated a bit on the bread recipe using semolina and adapting a recipe I found on King Arthur Flour site. The biga/preferment or poolish is Elaine’s recipe. 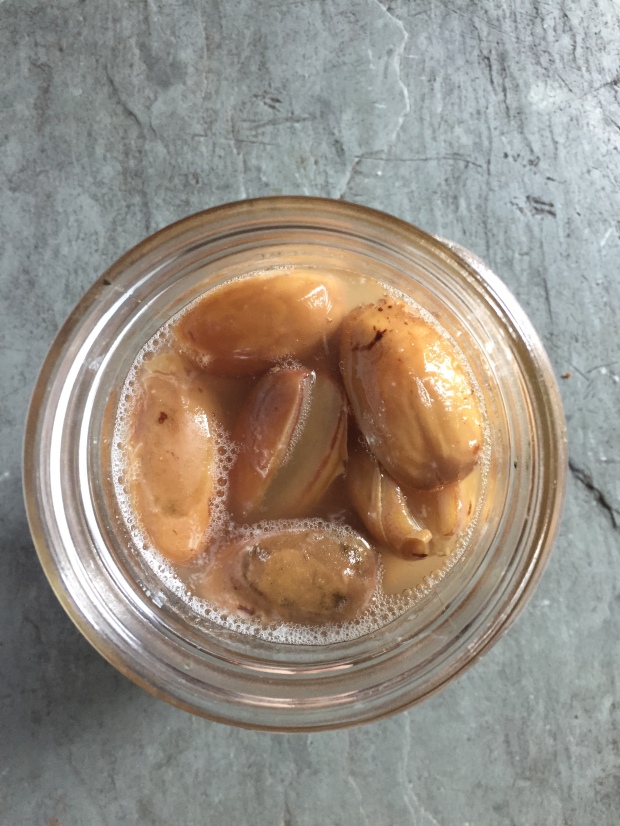 Dates after a week see the bubbles

1 1/2 cup bread flour (150 grams) (add more if the dough is too wet, by the spoonful) It should be soft but not runny. Use equal parts flour and water pretty much.

Mix together and let sit overnight covered in plastic wrap and a tea towel. In the morning it should be bubbly. 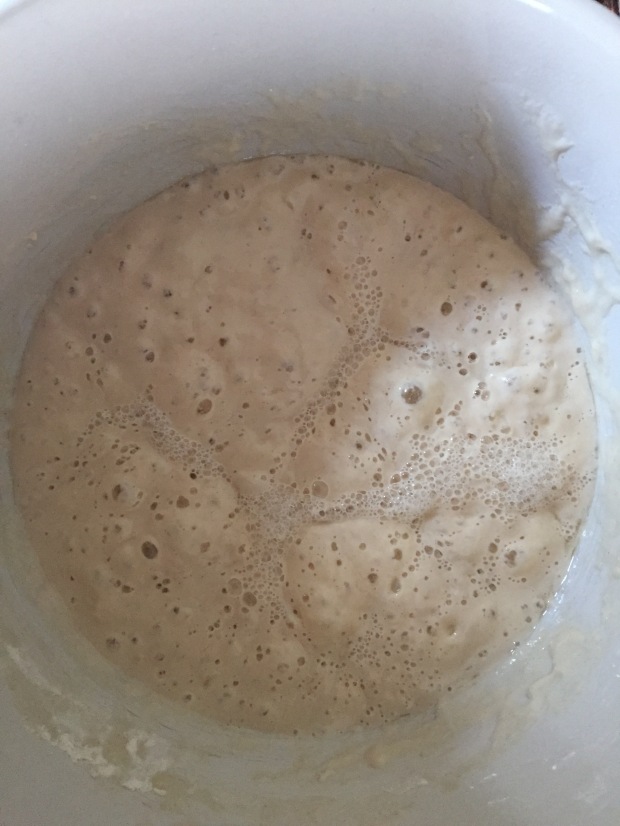 Put all the ingredients in the bowl of a stand mixer fitted with the dough hook. Mix on low speed for about 5 minutes, it will become a cohesive dough. Turn the mixer off, cover with plastic and let sit for 30 minutes. Turn the mixer back on medium speed and knead for another 5 minutes. Remove dough to a clean lightly oiled bowl, cover with plastic wrap and a tea towel and put in the refrigerator overnight.

The following morning take it out of the refrigerator and let it come to room temperature. Shape into desired shape (I made a boule), place on parchment lined baking sheet.nCover with oiled plastic wrap loosely and a tea towel and let rise for approximately one hour. When you press your finger in the dough it should leave an indent.

Heat oven to 475 degree’s. Slash the dough with a razor, knife or lame, dust with some flour and place in the oven, throw a few ice cubes at the bottom of the oven. Immediately reduce the temperature to 425 degree’s and bake for approximately 35-40 minutes. Bread when tapped will sound hollow and it will be a golden brown. You can also place a parchment round in a dutch oven and bake covered in the pot. You will need to bake a little longer using this method. Elaine gives instructions in her recipe.

King Arthur’s recipe offers a great idea for keeping the bread, place cut side down on counter or cutting board, don’t cover it with anything. The crust will stay pretty crisp and the inside of the bread stays soft. It works. 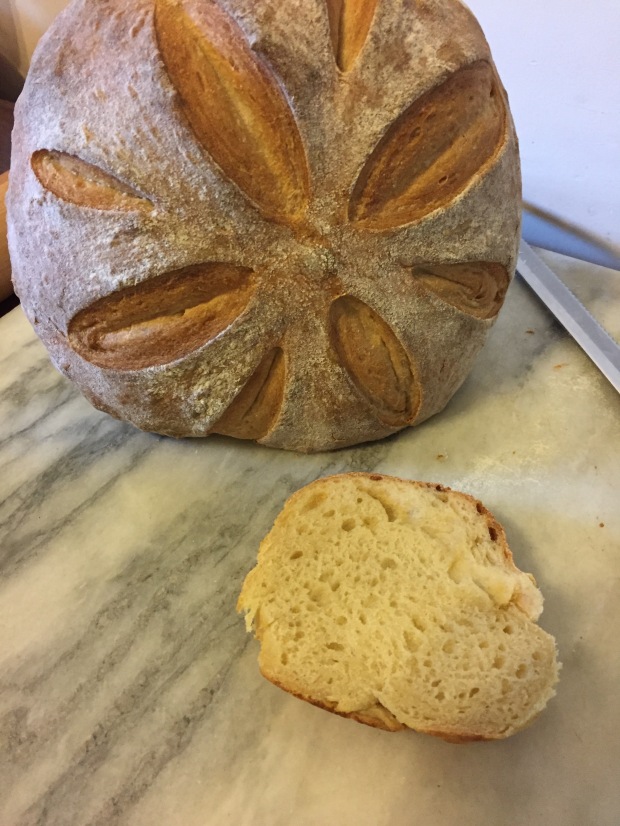 Stand the bread on a counter cut side down the bread stays soft the crust fairly crisp. This loaf was made with a little more yeast than the one below. You can see the difference.

I did experiment with the semolina bread the first loaf I added a half tsp of instant yeast, the second loaf 1/4 tsp. There is a marked difference in the texture of the bread and I think both are good.