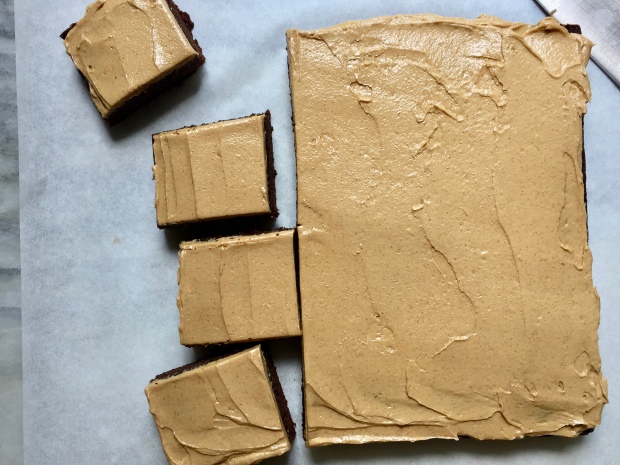 I really want to expand my horizons, I have always been a butter and sugar kind of gal and use it when I bake just about everything. On July 4th I went to a BBQ at a friends house and one of the guests practices a paleo lifestyle and has really done amazingly well. While we all enjoyed the cheesecake for dessert I watched her sit there with nothing and felt kind of bad. On Instagram I noticed a post for paleo brownies with a peanut butter frosting that looked amazing and I decided to give them a try. If you follow strict paleo, the brownies in the recipe are not 100% paleo as they have a peanut butter frosting and peanuts are not permitted. I chose to follow in that same line of thinking and the frosting I made is also not 100% paleo but it’s close. It really is delicious, I paleo-ized  (don’t think thats a word) Merrill Stubbs buttercream recipe on food52, the same one I used for the dacquoise that I made a few months ago. Since the recipe calls for powdered sugar (not paleo) and coconut palm sugar is allowed, I thought I   would make my own powdered sugar using the coconut palm sugar and a little coconut flour. It worked well, if I had a vitamix it probably would have been a little better but my Ninja did a pretty good job. There are a few pieces of the coconut sugar that didn’t break down but IMHO that gives it character. The coconut sugar gives the buttercream a caramel flavor.

The brownies which are really more like a cake are so easy to make, you put all the ingredients in a blender, process until smooth and pour into a prepared pan. Got to love that! NOTE: Be careful not to over bake, I think I did and they got a little dry. Whenever I make a recipe for the first time I follow it to the letter but if I make these again I will make a few changes. I am not going to embrace a paleo lifestyle although in theory it sounds good and I know people that have lost an incredible amount of weight and feel great but I find it too restrictive, but rather choose to try to eat healthfully with portion control and limit sugar. I also could not eat as much meat as you are supposed to eat on paleo, not my thing. 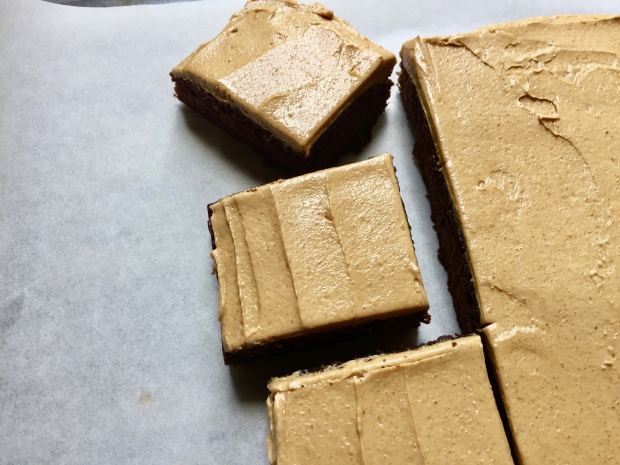 Line 8 inch square pan with parchment paper so there is an overhand on 2 sides. Grease the sides and bottom with a little coconut oil.

Add all the ingredients to your blender and process until smooth, you may need to scrape the sides once or twice. Scrape into prepared pan and bake for 20-25 minutes (test after 20 minutes). Cake tester should come out fairly clean (a few crumbs are fine). Better to be a little under done than over done, it continues to bake a little after removed from the oven.

Place in high powered blender like vitamix and process until it’s powdery. It took about 10 minutes. If you have a vitamix use the dry container for this if not it’s ok, I used my to go cup on my ninja and it worked great. Place in a covered container. You might want to double the recipe if making the frosting because you need 1 1/2 cups.

Place everything in a bowl and beat with your electric mixer until smooth and creamy.

Frost the brownies when cooled and cut into pieces after frosting. Refrigerate until ready to use. NOTE: the egg can be eliminated but it gives a silky smooth texture that I love. The egg is not cooked or heated so make sure you use eggs from a trusted source, fresh or pasteurized.