I have a ritual that I do every time I cook, my kitchen must be thorougly cleaned, counters, floor, no dishes in the sink, every surface clean, for me it creates new energy and clears my kitchen. I also try to make sure everything I need is ready so I don’t have to go finding and grabbing with flour on my hands. So the ritual began early this morning in preparation for my puff pastry adventure. I had the butter in the freezer all night, the flour weighed and in the fridge as well. In retrospect I would not freeze the butter quite so hard because let me tell you it was hard work pounding that butter when it’s rock hard. In the video he makes it look easy, well not so much. I had it wrapped in plastic wrap which after a good pounding broke and I had to peel off the pieces from the butter. I decided to use a zip lock bag and sprinkled a little flour on the butter as per The Kitchn. It worked and I got the butter in a nice square and it was still pretty cold. The butter went back in the refrigerator while I rolled out the dough.

The dough comes together nicely in the food processor and forms a cohesive ball which I let rest for a few minutes under a damp tea towel. The hardest part of this recipe is pounding the butter initially, the rest goes very smoothly and if you have any frustration or feel the need to pound something try making puff pastry, it’s a stress reliever.

The first two turns went pretty well, it was hard to make it a neat rectangle but I did the best I could. After a 30 minute rest in the refrigerator I took it out for 2 more turns and there was a marked difference in the dough, it’s very soft, tender and pliable. Rolling it out was a breeze and doing the second set of 2 turns was easy. With only 2 more to go I have to say puff pastry is not all that much work but the proof is in the pudding I guess you can say and I was nervous to see how it turns out when baked.

Final Analysis: AMAZING recipe, with the exception of trying to pound frozen butter it was so easy to make. Honestly, I will never buy puff pastry again. It’s tender, flaky, buttery, pretty much perfect. I have enough dough in the freezer for another large tart. This recipe is a keeper. Also note, I am convinced using a good European butter is key, I used Kerrygold unsalted butter and it really does make a difference. 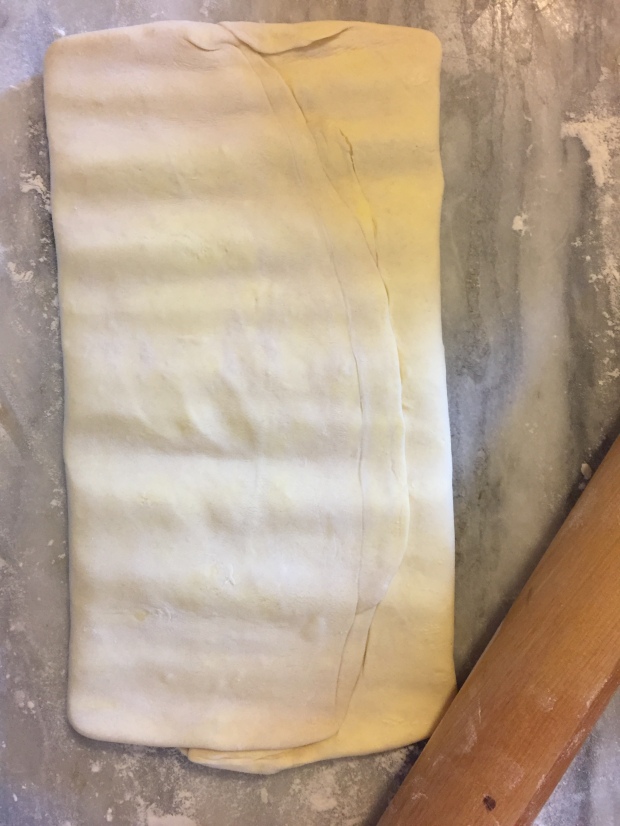 ready for the 4th turn see the flecks of butter 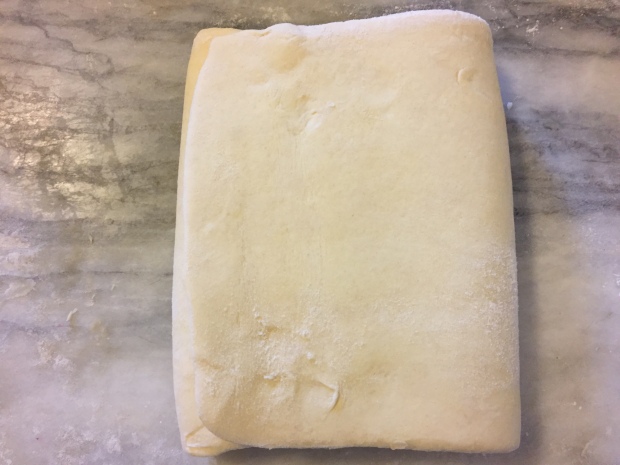 6 turns and I’m done, smooth, supple and feels like a beautiful dough if you look closely you can still see pieces of butter

1 punnet of strawberries, trimmed, hulled and cut into pieces (quartered or halved depending on size)

Mix everything in a bowl and let sit until sugar has melted and fruit has given off juices. Drain but save the juice. After draining sprinkle the cornstarch on the fruit and mix with a spoon. Pour the saved juice into a sauce pan and cook on medium heat until thick and reduced slightly. When you remove the tart from the oven cool for about 15 minutes then drizzle the thickened syrup on top of the tart. It’s delicious.

docked and ready for the fruit

Cut your dough in half and freeze the other half. Roll into a rectangle, using a sharp paring knife make a slice not all the way through so cut gingerly, you want the slice about an inch from the edges. Roll the edges to the cut line, dock the inside of the dough well with a fork (this is so it doesn’t puff). Arrange fruit on the dough, brush the edges with egg white that has been beaten with a fork. Sprinkle some finishing sugar or turbinado sugar on the whole tart. Bake in a pre heated 400 degree oven until golden brown and bubbly this tart took about 35-40 minutes. 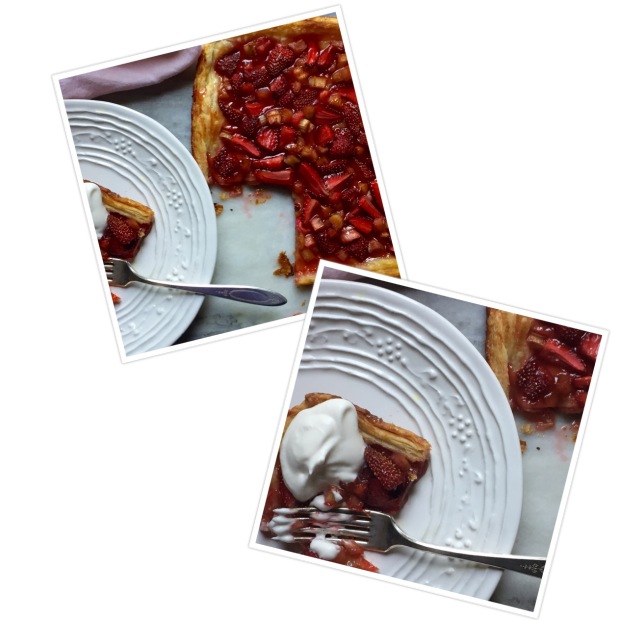