by apuginthekitchen on August 5, 2016 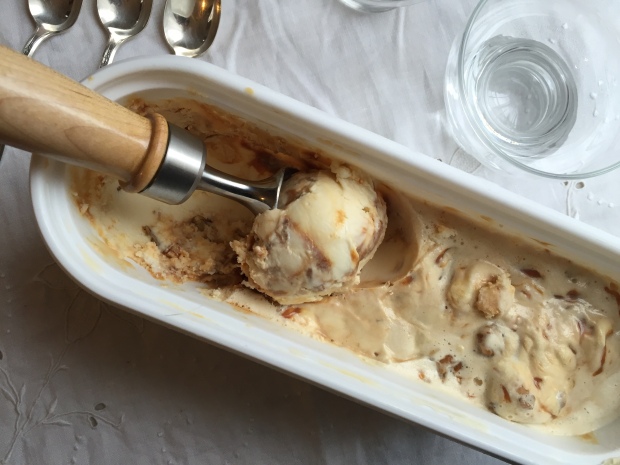 It has been so hot in NYC that I have barely turned the stove or oven on. Salads, quick cooking foods are what I am making and because of this my blog has suffered from neglect. Ice cream has become a major food group for me along with cucumbers and tomatoes. A few weeks ago I made mocha almond fudge and now I am going to tackle the other flavor that I love, Pralines and Cream. I am partial to Haagen Daz ice cream and their Pralines and Cream is amazing, but I have not found it in a store around here for years, it must be really unpopular with the general public, it’s not even in the Haagen Daz store near me. The other day I was rummaging through the frozen case in the market looking for a pint of vanilla and almost shrieked, there it was 1 pint of Pralines and Cream, it had probably been there for a while, it was caked with ice but I got it anyway. It was a little worse for wear, probably had partially melted but still the taste of this creamy, dreamy concoction was still there. I was able to commit to memory the taste, fresh in my mind and I set out to make my own. Pralines are not readily available around here, you ask for them and people look at you like you have 2 heads. Searching the internet for recipes for Pralines and Cream Ice Cream I came across one from Emeril Lagasse. There is a vanilla custard base, caramel sauce and pralines, pretty simple really. Taking into account the terrible heat and humidity and not wanting to spend one minute more at my stove than absolutely necessary I decided to use already prepared vanilla ice cream, make some pralines and use dulce de leche I had in the fridge (it’s ridiculously easy to make).  Love this because the time at the stove is minimal and the ice cream is really wonderful. The recipe for pralines is from Emeril and makes enough for several quarts of ice cream.

I don’t like the term semi homemade but thats what this is. Using Haagen Daz vanilla with homemade dulce de leche and pralines this was easy to make and was almost instant gratification and really pretty close to my beloved Haagen Daz Pralines and Cream.

This yummy ice cream is coming with me to Fiesta Friday #132, I’ve got the ice chest ready and will try to make it there without it melting. Angie’s co hosts this week are Sandhya @ Indfused and Nancy @ Feasting With Friends.

Put all the ingredients in a sauce pan and bring to a boil on medium high heat stirring constantly until it reaches the soft ball stage 238 -240 degree’s, if you don’t have a candy thermometer have a bowl of ice cold water next to the stove and drop a little in, if it forms into a soft ball it’s ready. Add the pecans and place the pan in an ice bath stirring constantly until cooled. Pour onto buttered parchment lined sheet pan and let cool. The consistency will be like fudge. When it’s cool break into pieces and store in the refrigerator until ready to use.

To make the ice cream (my shortcut) soften some vanilla ice cream (I chose haagen dazs) put half of it in a freezer container, sprinkle on some chopped praline and drizzle caramel or dulce de leche. Add the other half of the ice cream on top and add the rest of the praline and caramel, swirl with a butter knife and freeze for a few hours.