A Non Traditional Panzanella, A Gooseberry Red Currant And Plum Crumble And Salsa

The first thing that I made with my Farmers Market finds is a salad. There is nothing like a salad made with fresh vegetables. There is no recipe for this, it’s a salad after all and everyone has their own favorite way of making and dressing them, this is sort of a panzanella,  sort of because it’s not traditional. A traditional Tuscan panzanella is made with tomatoes and stale bread dressed with olive oil and vinegar. I spread pesto on the bread and put it under the broiler for a few minutes to brown. Saturday’s farmers market find included both cherry and regular size tomatoes, for a salad cherry tomatoes are so easy and I love how crisp and sweet they are.

Cut the cherry tomatoes in half, slice the onion very thinly, cut the cucumber into small pieces and throw it all in a bowl, season with salt and pepper.  Spread some pesto on the bread and either broil or grill until lightly browned. Cut into bite size pieces. Dress the salad with vinegar and oil. I don’t measure starting out light and adding more as/if needed. Add the bread and toss it together. Shave pecorino romano cheese on top and enjoy.

Today I experimented with some of the gooseberries. Having never eaten them or cooked with them I didn’t really know what to expect,  For the first attempt I thought a crumble would be nice and only made two individual servings in my tiny cocotte pans. I chose purple gooseberries, red currants and a golden plum. The fruit when baked produced a lot of juice and was very tart, next time I would probably add another 2 tbs of sugar although the tart fruit when eaten with some vanilla ice cream was really nice. For the crumble top I used spelt, oat and AP flour in equal parts added some butter and brown sugar. Before baking I dotted with a little butter and sprinkled with demerara sugar.  I thought adding a plum would be nice with the gooseberries and currants, somewhere in my research I saw that the gooseberry is a member of the plum family or vice versa, not sure thats correct but they do go together nicely.

4 tbs butter+ more to dot on top before baking

whisk the flour and brown sugar together add the butter and mix with your hands until it resembles pea size crumbs.

I didn’t measure the berries if I had to guess how much it was about 1/3 cup of each. Put all the fruit into a bowl and add the sugar, toss to combine. Spoon into baking dishes and top with the crumble topping. Dot with butter and sprinkle with sugar. Bake at 375 degree’s for approximately 20-25 minutes. Serve warm with ice cream. 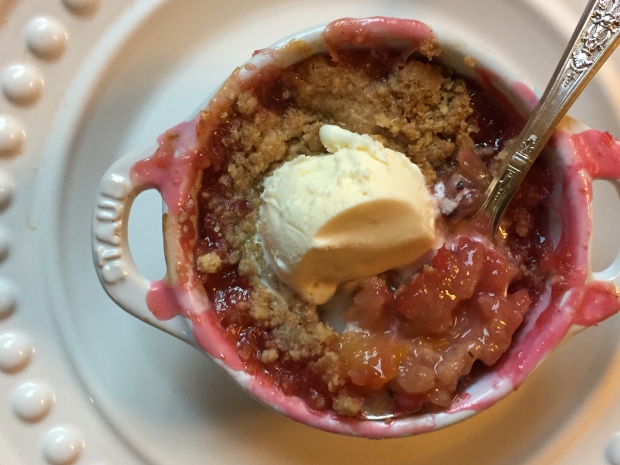 There are a few more recipes I plan on making with the gooseberries and will post them very soon, it’s fun working with an ingredient you are not familiar with getting your sea legs so to speak. The crumble was delicious the combination of gooseberries, currants and plum created a lot of juice and some of the crumble sank creating what was more akin to a cobbler. It was really good this turned out to be a cobbler/crumble.

The green gooseberries are very tart, sour really and using them in a savory dish seemed like it would be delicious. I had a flounder filet earmarked for dinner the other night and thought instead of a heavy tartar sauce (love it) a light fruity salsa would be nice with the fish. I didn’t measure, don’t need to with this type of dish, the beauty of it is that it is tailored to suite the individual’s taste.

makes approximate a cup of salsa

juice of one whole lime

Combine all the ingredients, serve right away.