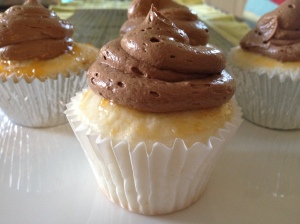 Orange scented angel food cake with a creamy chocolate orange buttercream pairs perfectly. I submitted this to a food52 recipe contest the theme is citrus and these cupcakes deliver citrus in every bite. I adapted Grace Parisi’s angel food cupcake recipe to include the orange zest and I adapted Martha Stewarts Chocolate Buttercream recipe.

Combine sugar and egg whites in the bowl of an electric mixer. Place the bowl over a pan of simmering water; whisk until the mixture feels hot to touch and the sugar is completely dissolved, about 3-5 minutes. Transfer the bowl to the mixer stand. Using the whisk attachment, beat the mixture on medium-high until cooled, about 15 minutes.

Add the butter a piece at a time beating continuously until its all added, now add the cooled chocolate and beat until combined. Use immediately.

Spread a thin layer of the marmalade on top of the cupcake, pipe some of the chocolate buttercream in the middle. Enjoy!