Community Meeting, Half Marathon, Bark Fest And a Noodle Bowl

It has been a crazy few weeks. Have to say it is kind of a blur. Our neighborhood has been fighting a proposal by DOT to change Clinton Ave a two way street into a one way street with TWO buffered bike lanes. Safety for everyone on that stretch came into question. There are many big coop buildings with MANY elderly and disabled residents and we saw flaws in the plan because (in a nutshell) they did not take into account emergency vehicles, delivery vehicles, access-a-ride- fire trucks, sanitation trucks not to mention how the elderly and disabled can cross two bike lanes to get to their vehicles or service car.  The plan was ONLY considering cyclists. The 2 way (NEVER BEEN DONE BEFORE IN BROOKLYN) buffered bike lane would be curbside thereby eliminating curb side parking for residents with cars, the city has long been trying to make it as difficult, unsavory and as expensive as possible for those who drive. Limited parking would be in the middle of the street and the one lane would be going north bound. Traffic from the eliminated lane would be diverted to my street and one other.  My opposition to this plan is because of safety issues for the residents but also the block I live on CANNOT safely sustain any more traffic, it is already a bumper to bumper traffic nightmare during certain times of the day and it would get much much worse.

Even the elected’s had concerns

I don’t own a car, I walk, take public transporation or even bike from time to time and I am all for safety for cyclists but this plan is only taking them into consideration and not the needs of the community as a whole. We fought back and fought back hard, opposition was HUGE and loud and it got ugly because the people from Transporation Alternatives, a very powerful and wealthy lobbying group for the cyclists were there to try to discredit us. In the end DOT temporarily withdrew their proposal and promised to go back to the drawing board, we will see but we are still mobilizing and fighting because the battle is has not been won there is only a short reprieve. More to come on this one.

I had the honor and priviledge of holding the tape for the winners of the Air Bnb Brooklyn Half Marathon. What a great day it was, beautiful weather for running and over 27,000 runners started at the Brooklyn Museum on Eastern Parkway and the race ended at Coney Island. The race started at 7AM and I had to be at the finish line before 7:30AM, a very early morning, Percy is not used to having his morning walk at 5AM but he was a really good sport.

Percy is ready for bark fest

My friend Carla and I took our dogs, Percy and Olive to Bark Fest. It was in Manhattan on Pier 97 on the west side of the city. We bought VIP tickets which gave us some perks. It was my first bark fest, last year Nando was very ill and I couldn’t go, I have heard it’s fun so thought we would give it a try.

It was a beautiful day, not too hot a little over cast which was good for the dogs. I would have preferred it were held in a park with grass rather than a concrete pier. The people from Bark Box were the people who organized it. Honestly, it was ok but we were a little disappointed, It was packed there were thousands of people there, only 2 food trucks we had to wait in line almost 2 hours to get something to eat, there was a long line for everything. We got there right when it opened at 2 PM and got a few minutes in the VIP lounge  but after that there was over a 1 hour wait to get in. Would I go again? Doubt it. 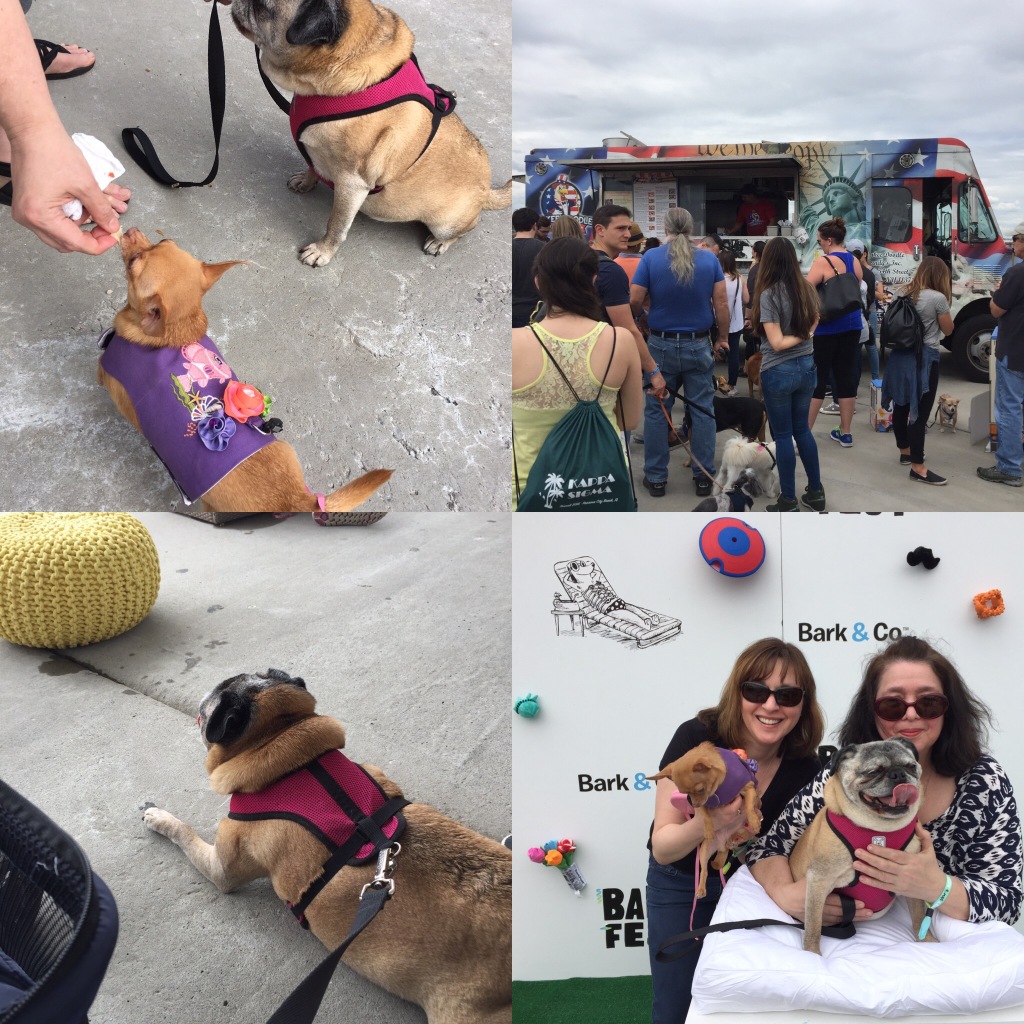 I saw this on Pure Wow and thought it looked easy, delicious, light and fresh and I wanted to immediately make it. I did just that and it was really good, so good in fact that I had to make it again and tweak a bit. The first one I made I used chicken which I sauteed in sesame oil as called for in the recipe, the second time I marinated a pork tenderloin in soy sauce, lime, sesame oil and ginger. It really is a wonderful light meal.

1. In a blender or food processor, combine the ingredients for the peanut sauce and process until smooth. If the sauce is too thick, add more water 1 tablespoon at a time. Set aside.

2 boneless skinless chicken breasts or you can use pork tenderloin

Place some rice noodles in a bowl and fill with boiling water add some salt, add a little salt and let sit until noodles soften.

Clean lettuce and place in bowl, saute the chicken in sesame oil, season with salt and pepper and slice.

toasted cashews chopped as a garnish

Add whatever you like, avocado, eliminate meat entirely if you like. Drizzle with peanut sauce and enjoy.

The second time I made it I used pork tenderloin which I marinated in sesame oil, soy sauce and ginger and pan seared then finished in the oven. Takes only minutes.