A Bowl Of Pasta 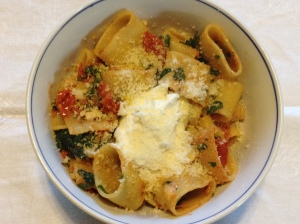 A Bowl of Pasta

I had a very busy day, no time to cook and I really wanted pasta for dinner, but I wanted a quick fix. This bowl of pasta took me 25 minutes to put together and is satisfying and delicious. I had some really interesting pasta called Calamarata in the pantry, it’s a dried semolina pasta, almost a full pint of grape tomatoes, some Italian parsley and some mascarpone and that’s what went into this dish, I also added a generous grating of pecorino romano cheese. My pasta craving was satisfied and all in less than 30 minutes. I would normally put ricotta on this and that would be delicious, I was out of ricotta but had the mascarpone that needed to be used and when combined with romano cheese it was just the right amount of creamy sharpness. You can use whatever kind of pasta you happen to love and have in your pantry, I think this dish lends itself to the substantial pasta like rigatoni or even penne. This is a dish for one, and really there is no wrong way to make it, you can add as much or as little of each ingredient. I used parsley, because I happen to like it but spinach would also be a lovely addition.

Pint of grape tomatoes cut in half

Put large pot with a generous amount of well salted water on to boil.

In saute pan add the olive oil, when its hot add the garlic and cook until you can smell it, don’t let it brown, Add the tomatoes and cook until they soften and release some of their juices. Remove from heat and set aside until the pasta is done,

When water boils add the pasta and cook until its just softened for a substantial pasta like calamarata it took approximately 5 minutes, you don’t want it to be cooked so that its soft. Place the tomatoes back on med/high flame and with spyder or slotted spoon add the pasta to the tomatoes, cook stirring frequently adding a little of the pasta water to create a sauce. When pasta and tomatoes are beautifully cooked add the parsley, cook another minute or two. Grate some of the romano on top and toss to combine. Serve in a bowl with a nice dollop of mascarpone and another grating of romano cheese.